Today we’re casting the line back in time to August 2014. Enjoying a late-summer break along the North Shore with the boys and two of their best buds, we were soaking up those steamy dog-days before the school bells started ringing again. Looking for a new adventure, we tried a Lake Superior charter fishing trip. The guys reeled in a few lake trout, I snapped some shots and we devoured our catch over an amazing foil-packet dinner that evening. We’d set sail again in a heart beat…

Captain Kelly Shepard of North Shore Outdoors served as our knowledgeable guide. He’s been leading anglers of all abilities around the Big Lake and inland lakes, too, for 40 years. He’s a seasoned expert and patient, too! We met Kelly at 7 a.m. sharp at the Grand Marais Harbor. As we tooled into the vastness of Lake Superior, we were greeted with a lovely early morning view of the sleepy village shoreline. 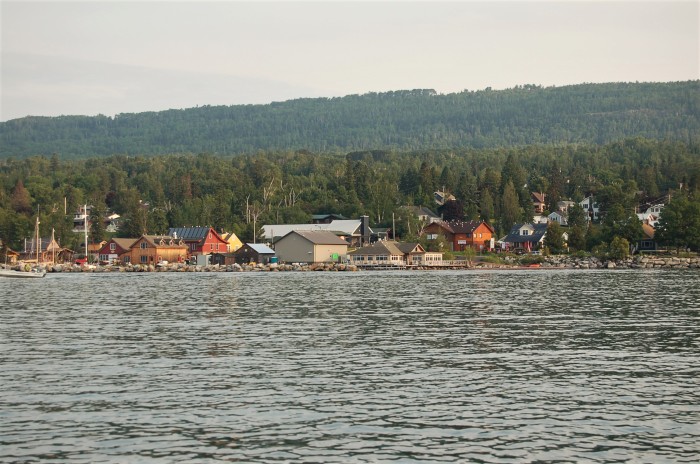 Out on the water, we motored along 20 minutes or so, enjoying the lake-scape and doing our best to keep our fingers warm. Temps were in the 50s, but the lake winds were brisk. Reminder for next time … pack more layers!

It was exciting to keep a watchful eye on where we were headed as Captain Kelly explained the temperature of the water, the depth we’d be fishing at and how the outriggers work. Kelly had all the heavy-duty gear and equipment set up; we rode and rocked along and listened. He advised us to stay away from the side of the boat given if we were to fall in, it would be terribly cold with risk of hypothermia. Yikes! We all  adjusted and scooted one inch toward the center of the craft.

Seeing the layers of the morning fog blanket the hillside was so dreamy and the wall of trees lining the shoreline was lightly ghosted. Looking back at this photo, it’s rather deceiving. The lake appears relatively calm, yet the boat was rocking to and fro quite a bit. 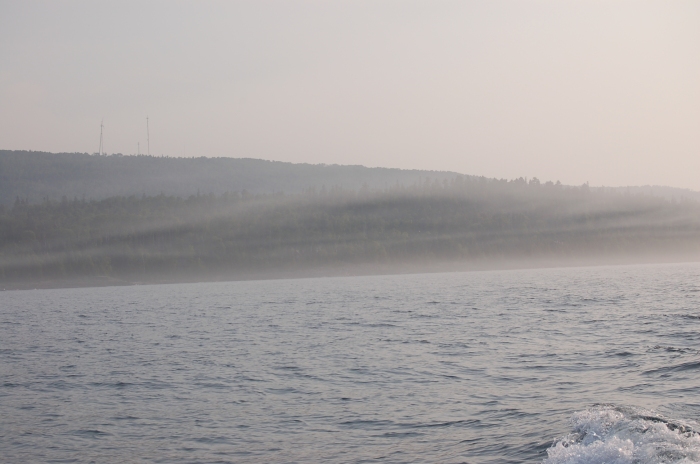 We settled on a spot, I think it was about 150 feet deep or thereabouts. Captain Kelly had each of the boys try their luck. Evan went first and ended up catching the biggest lake trout. Kelly was right there with the net to nab the fish. 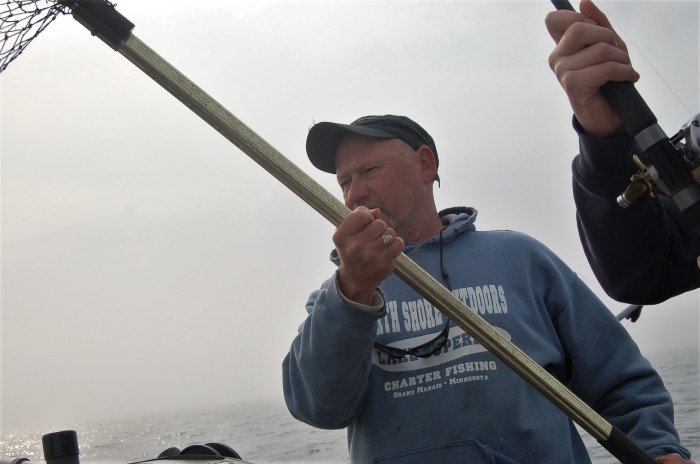 The boys each experienced the thrill of reeling in a Lake Superior fish. It was awesome! Because of the heavy weights used on the line, I want to say they were a hefty two- to three-pounds, it took a little more muscle to bring in the catch. 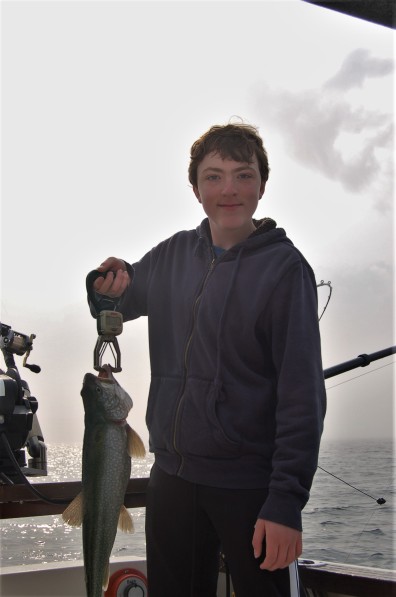 Eric may have had the most fun of all of us—co-captain Eric, that is. He took the helm while Captain Kelly offered an assist to the guys as they caught their photo-worthy souvenirs.

The rain set in so we wrapped up our gear and started making our way back to shore with four good-sized fish in tow. The half-day outing worked well for us. 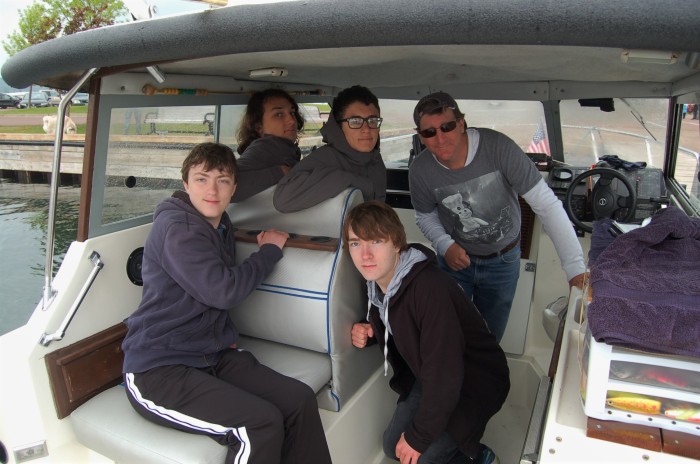 Once we docked, Kelly cleaned the fish and packed them in ice for our 20-mile ride back to Lutsen.

He even shared his special foil-packet recipe for fresh caught lake trout. It was so tasty..

If you’re thinking of trying a Lake Superior charter, I’d  highly recommend Captain Kelly of North Shore Outdoors. He also arranges hunting tours. You can visit his website here, or email him at kelly@northshoreoutdoorsmn.com. We also know Kelly from Caribou Highlands where he works security and building management in the off-season.

This story first appeared on From Lutsen with Love in June 2018. All reflections and images are my own editorial observations.

fromlutsenwithlove Seeking adventure while mindfully appreciating the wonder-filled moments that surround us every day. We have a small condo near Lutsen, MN, along the North Shore of majestic Lake Superior. I've tried to capture memories of our year-round family trips, which I'm thrilled to share here. I love to write, snap pics, travel, ski, try new recipes, hike, work-out, watch movies and sip on red wine. Thank you for visiting FromLutsenwithLove!
Published June 11, 2018June 13, 2018